“Fly safe you guys,” the squirrel yelled to his new friends as their air ship began to rise.

“Why he thinks we is guys?” Pokey asked.

“Purrobably he say dat to everybunny except squirrel. We not his type.”

“He like us fine but he is squirrel. You is box turtle. I is Tortie cat. We meowy different.”

“Dat nutz. We is all animals… and we is sisters!”

“How else you make family?” Pokey asked as if suddenly unable to remember her days before she arrived at the pet store.

“You think meowmy make you?” Harry asked, curious to learn if her sister’s memories were fading.

“No be silly. I comes from da turtles! But dat different. I no have family until ma find me. Family more fun with you. Three is magic number.”

“Meowmy say dat… and right meow we is only two. I miss meowmy.” As soon as she said it, a bright red dragonfly appeared at her side, hovering over the boat between the balloons. Harry remembered her mom say on their hikes that the dragonflies are her friends. She stared silently for a while, hoping it would start the conversation, then she asked, “Did meowmy send you watch over us?” The dragonfly turned its head quickly, fixing its giant eyes on Harry, but said nothing.

“What you mean? I hear duh whole time. We leaves together.” Pokey could only see the very edge of the boat from where she rode. She didn’t shout, but the dragonfly dashed away at the sound  of her voice.

“You scare him off!” Harry was more than a little disappointed to see it go so soon. “Why matter if you boy or girl? Why not boy and girl like me?!”

“Nobunny is boy and girl…”

“Turtley not mean you is both…”

“Nobunny know if I boy or girl when born. Dis not make me both,” Pokey muttered. Normally they would get an outside opinion to settle the debate, but there wasn’t another creature in sight.

“We is turtley meowgical. No forget! We stronger together. We flies duh ship.”

“No dragonflies up heres.”

“Not right meow but I sees Red. Is furriend of meowmy. Purrhaps he want fly with us?”

Pokey knew there are thousands of red dragonflies in the world, but she didn’t want to start another debate with Harry so she kept that information to herself while they floated blindly through the clouds. They emerged from the fog just before they reached the border. “You thinks day has good bugs in Canada? I turtley hungry but no want duh dry foods.”

“I hears of dis sweet stuffs from birdie furriend when go walkabout. Da hoomans turtley crazy bout dis goop.” The mounties stared with jaws agape as the air ship floated past so close they could almost touch the hull.

Not one of the uniformed officers was composed enough to answer.

“No worry, Pokey. I has fastest paws in duh West. When we sees dem, I gets duh bugs furr you. No purroblem.”

Figaro had been eagerly awaiting his new friends’ arrival ever since their mom asked his dad if her kids could visit. He was worried they hadn’t been  able to cross the border and had been pacing back and forth in his garden for hours. The intense relief he felt as their air ship appeared on the horizon caused him to stumble into a somersault that left him flat on his back. He quickly gathered himself and sat tall and regal until the ship was safely nestled on his lawn. “Welcome to Canada,” he said as he watched Pokey slowly work her way down the balloon.

Without so much as a thank you, Harry began to explain why they came: “Meowmy say need be rich and furrmous as duh Ryan Gosling to spend all time with us. Puurhaps we find duh Ryan and he tell us how do?”

“Dis meowy good plan. Duda not know duh Ryan but we finds him. No purroblem.”

Harry somehow felt the need to further convince Figaro of the worthiness of their cause and began to tell their life stories and how mama had always given them a nice home but said they might soon have no place to live. She was so passionate about helping mama she didn’t notice when her sister finally joined the conversation.

The felines glared at Pokey for interrupting the conversation before heeding her command.  They nodded at each other, turned back to back, stepped three paces each, then pounced, swatted, and gathered an assortment of plant hoppers until Pokey screamed, “Stop! Dat nuf!!”

Both felines fell to the ground, exhausted and panting. “Who win?” Harry asked. “My pile bigger?”

“Not same!” Harry rose to her feet and began pawing her pile into a taller configuration. She had never been good at making feline friends. She came to meet Figaro at mama’s request. Pokey was not surprised by her sister’s behavior and continued to munch from both piles equally without uttering an opinion to break the tie.

Figaro attempted to relieve the tension between them by asking what music they like. He hoped they might have a favorite in common so they could sing together until they felt covered in sunshine and good times again. Unfortunately, it was a subject Pokey and Harry had debated often and, when Figaro told them they had flown past the Rock and Roll Hall of Fame on their way, the sisters rushed back to the air ship to head to Cleveland. Figaro tried to persuade them to hunt Ryan Gosling before they left, but they were convinced they could find someone just as great to help them later.

This story was written to help remind you that first impressions are not always right and that each individual’s view of the world is less flexible than you might think. Visit Project Implicit and check out their social attitude tests to learn more.

And… since we used his name several times, we would like to invite you to support Ryan Gosling’s favorite charity – The Enough Project – which works to create peace in some of the deadliest conflict zones in Africa. 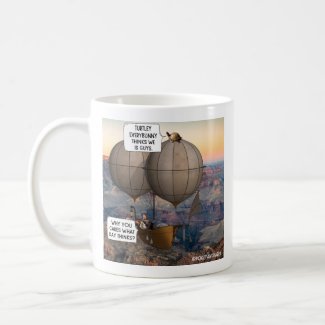 Why You Care What Day Thinks? Pokey and Harry Coffee Mug
by RachelHoyt

One thought on “Everybunny Thinks We is Guys”